As you may know from regular reading, I like short books.

I know, it’s dumb, but sometimes (like with the book I’m reading now, “A Lady Cyclist’s Guide to Kashgar” by Suzanne Joinson) authors just don’t know when to call it a book. Life’s short, so I respect authors who can get in and out of a story without too much padding. It’s even better when they leave a reader with something to think about.

That’s the case with two short novels I read late last year that I still think about. They couldn’t be more different in theme or style, but both pack a punch.

END_OF_DOCUMENT_TOKEN_TO_BE_REPLACED 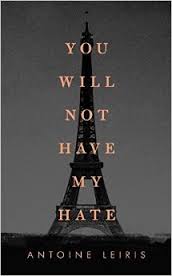 On a Friday night in November, 2015, French journalist Antoine Leiris kissed his wife Helene goodbye on her way out the door for a concert. He was watching their 17-month-old son, Melvil. It was the last time he would see her alive.

Helene was one of more than 90 people killed by terrorists at the Bataclan concert house that night in what was the deadliest attack on France since World War II. Two days after the attacks, while still trying to understand what had happened to him, his child, his country, Leiris wrote an open letter to the terrorists in a Facebook post (ah, modern life) that went viral.

END_OF_DOCUMENT_TOKEN_TO_BE_REPLACED

I admitted I was not up for the challenge of the 600-page Bleak House. Even though I enjoyed it and still think about the characters, I realize that it was like tackling a marathon after having only run short sprints. One has to build up.

Exhausted from my marathon, I’m back now to sprints.

If you’re a regular reader of Shelf Improvement, you’ll know that book covers draw me in as often as a title or author. So when I saw the title, “In the Café of Lost Youth” and the author, Nobel Prize-winner Patrick Modiano (to whom I had just been introduced) and size (118 pages) I was almost there.  The cover was the clincher.

END_OF_DOCUMENT_TOKEN_TO_BE_REPLACED

I have been finished with Albert Camus’ “The Stranger” for a week or so now, but have been unwilling to post about it because I’m not sure what to say about it. I think most of what I wanted to say is here. It is the first category (a book you read in high school) in our Classics Challenge 2016. I’m going to tell you this post has spoiler after spoiler, so don’t read if you don’t want the entire book ruined.

I know there should be more that I want to say, because the book has left me oddly unsettled. There is much more to this novel than I remember. So I wonder why I can’t put my thoughts into words.

END_OF_DOCUMENT_TOKEN_TO_BE_REPLACED

Regular readers will know I complain about bad copy editing in books.

I mean, really, people. If you’re going to put something on paper and between two hard covers and expect me to cough up $25 for it run it through a goddamn spellcheck. It’s free with Microsoft Word.

At work, we don’t send anything to anyone without overediting. “It wouldn’t hurt to get another pair of eyes on that,” I hear after the fifth round of proofing—and that’s just for the sign-up sheet for the holiday potluck.